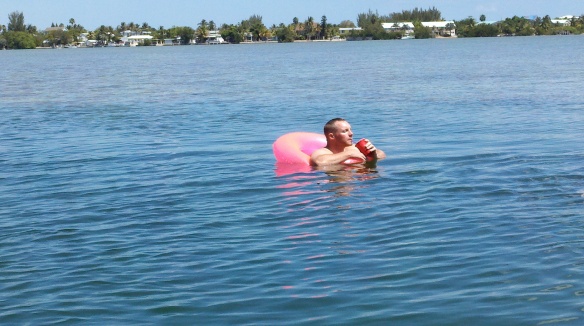 Jimmy Juice (n. s. pronounced jím’ê joos), also known as Juice, The Juice, or Pirate Punch, is a legendary alcoholic beverage consisting of rum and sugar-free fruit juice. It is normally prepared cold. It is usually garnished with citrus fruits. It is served in either a tall glass or red Solo cup.

The exact origin is uncertain, although there is strong evidence to support the theory that this drink originated along the coastal regions of New Jersey. The drink was created by mixologist, James Hoffman. Around the year 2002, Hoffman prepared this drink by mixing Bicardi Rum with fruit punch. Over the next several years he experimented with the beverage by preparing it using different varieties of rum including Bicardi Limon, Bicardi O, Parrot Bay, and Cruzan. It was around the year 2005 when Cruzan became his rum of choice. Shortly after, Hoffman met party girl and food enthusiast, Jennifer Pennella, who later became his wife. She introduced Hoffman to sugar-free drink mixes and Jimmy Juice adapted from consisting of rum and regular juice to the rum and sugar-free drink mix it is currently made with today. It was agreed by both Hoffman and Pennella that using this variation resulted in decreased hangovers and that it’s reduction in calories was beneficial.

Most commonly, Cruzan Rum is mixed with Sugar-Free Weyler’s Pink Lemonade. However, it is acceptable to mix either Cruzan Rum or Parrot Bay Key Lime Rum with other types of sugar-free juice mixes. However, Bicardi is never used.

Equal parts of rum and mixer are poured over ice in a very large glass. Fruit garnishes are typically served on the glass’ rim. A colorful straw and paper drink umbrella is also placed with the beverage. When being prepared for large groups of people, the drink may be prepared in a vat with sliced fruit, allowing time for the fruits flavors to combine.

The drink is consumed by individuals with the inclination of relaxing, socializing, or partying. The beverage plays an important part in social events mainly because of the neurological effects it has on it’s consumers. It is known to reduce attention, slow reaction speeds, and decrease inhibitions. Individuals who consume this beverage have been known to jump off high objects such as bridges, participate in public displays of nudity, and play with fire as well as other explosive devices.

lime wedges or other fruit garnish of your choice