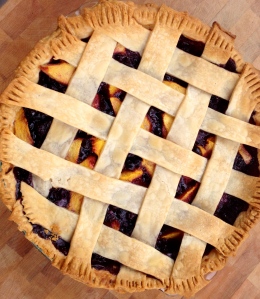 It’s 3:36 AM and I’m awake, baking and blogging. This time it’s not because of my frequent insomnia or because of my baking addiction. I’m up at this wee hour of the morning because I was kicked out of my own bed. I’ve been thinking… backtracking… trying to piece together how this happened. How could it have come to this? Well….

The day Jimmy and I first brought home a dog, the rule was : The dog will sleep in his crate in the living room and we will sleep in our bed. Period.

Then the rule became: The dog can sleep in his crate in the bedroom and we will sleep in our bed.

Then the rule became: The dog can sleep outside of his crate in the bedroom and we will sleep in our bed.

Then the rule became: The dog can sleep anywhere in our bed as long as he does not disturb our sleep.

Then the rule became: The dog can sleep anywhere in our bed and he may bring one of his toys with him as long as he does not disturb our sleep.

Now the rule is: The 95 lb. dog sleeps anywhere in the bed he wishes along with all of his chewed up, slobbered on toys. He gets first dibs on pillows and blankets. He may request to be pet or have is belly rubbed at any point in the night. Barking at noises outside are kept to a maximum. His breakfast will be served at his demand between the hours of 5:00am-6:30am. Humans are to obligue.

To give you a better understanding of what the sleeping arrangment looked like when I left the bedroom not to long ago, I drew a little diagram… 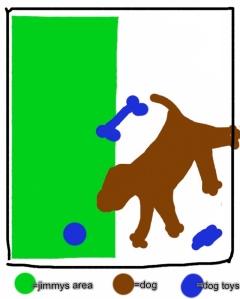 Yes, I suppose I could crawl up into a tight fetal position in the top right corner (believe me there’s many of nights that I have) but instead I’m waiting for the oven timer to ding and off to the couch I go. Tide better look out though-tomorrow night I’m rearranging real estate.

For the crust- using a food processor pulse the flour, salt, and butter until it resembles crumbs. Add water 1 tablespoon at a time until dough can be formed by pressing it between your fingers. Divide dough in half. Then roll out 2 large circles on a floured work surface. For the filling- Peel the peaches, then slice into thin wedges. Combine peaches with blueberries in a mixing bowl. Incorperate sugar, cornstarch, and lemon’s juice and zest. Stir until the fruit is well coated. Press one pie crust into the bottom of a pie plate. Then, fill with the fruit mixture and top with the second pie crust. Press edges with fork and cut a few slits in the top to allow steam to escape. Bake at 350 for 45 minutes.