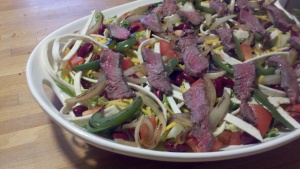 Last week, I glanced out my living room window and caught sight of my dog moseying around down by the river bank. He appeared to be holding some kind of black object in his mouth. I looked closer and saw it was a duck- a dirty dead decaying duck! And, he was not just holding it in his mouth, he was devouring it! I yelled through the window, “Tide!! Drop it!!” As if. He looked up at me. He began chewing faster. I threw on my coat and shoes and began trudging down through the reeds, the mud, and the muck, all the while shouting, “Tide! Drop it! Drop it, Tide! DROP IT!!!!” The closer I got to him, the harder and more quickly he chomped down. By the time I reached him, he had eaten the entire thing- feathers, bones, beak, and all. He stood before me with nothing but a webbed foot hanging out from between his lips. I took his jaw in my hand and insisted, “DROP IT!!” His teeth stayed clenched to the ducks last remaining body part. I yelled, “Tide! If you don’t let go of that *!%#@^ thing, I’m going to beat your a$$!!!” He cocked his head and took a step backward. The next several minutes consisted of a wresting match, finally ending with me on top of him, prying from his mouth what was left of the mutilated waterfowl. I then bolted back into the house, turned the kitchen sink faucet on to hot, and began vigorously scrubbing my hands in a fashion similar to the way a surgeon does before entering an OR.   I started thinking… why is it that a dog can eat a dead rotten animal and afterwards be perfectly fine while humans are likely to throw away a container of milk that is one day older than it’s expiration date? Have we become too germaphobic for our own good? After all, this was not his first experience ingesting a tainted animal carcass. He has also been caught eating a box turtle (twice,) a bird, a mole, a blueclaw crab, a horseshoe crab, goose poop, cat poop, and his own poop. Never once has he been a victim of food poisoning, dysentery, or any other kind of toxic shock. I, on the other hand, am haunted by that excerpt on the bottom of most menus that reads “*Consuming raw or undercooked meats, seafood, shellfish, or eggs may increase your risk of food borne illness.” While craving a nice juicy cut of still-mooing filet mignon I find myself replying to the waiter with, “Well-done, please.” Today, thanks to Tidey, I am taking a stand to germaphobia and making a Fajita Salad with beef cooked RARE! Ok, Medium-rare.

Season steak with chili, cumin, salt and pepper. Grill steak or broil in oven til cooked to desired temperature. Let rest for about 5 minutes, then slice steak into thin strips. On an outdoor grill or in a frying pan, cook peppers and onions til tender and char-marks are present. Assemble salad by layering romaine, tomatoes, beans, cheese, and tortilla strips. Top with peppers, onions, and sliced steak. Sprinkle on cilantro. Whisk together lime juice, olive oil, garlic, salt and pepper to make salad dressing. (Ranch dressing also goes well.)